Creative Individuals had been lucky enough to be selected to partner with Malta’s leading innovation summit, Delta. After months of preparation leading up to the event, marketing strategies, endless meetings and event planning, the week had finally come where all of our hard work would be showcased for the digital world to see.

Delta Summit officially started on October 2nd and the main conference was being held at the MFCC in Malta. Our creative individuals had come together to film and create content for the blockchain and digital world to see. Our main aim was to capture the importance of this event and show influential figures from all over the world coming together to celebrate this industry and the advancement of all things digital.

Being a digital agency ourselves, we knew we could smash this so we planned, prepared and pulled out all the stops to create awesome footage to promote the event. The days in the lead up to this event were non-stop to say the least! Various venues across the island were being used to promote Delta and activities were being held for so many people to get involved. Our main job was to film everything and edit as the days went on. A quick turnaround was incredibly important in the lead up to the conference and especially throughout. We needed to promote this event as best as we could and really draw attention from the island of Malta and beyond.

Starting on Monday 30th September, Tech Week kicked off with a networking event in partnership with Okex. Influential figures gathered to network, along with the Exec Chairman of Delta – Abdalla Kablan, Hon. Silvio Schembri and Tim Byun. A great start to an impressive week. Next up came the Okex Hackathon at the University of Malta on 1st October, we constantly aimed to capture the buzzing atmosphere between teams as students battled their way through the hackathon. As evening came, we took ourselves off to Malta Stock Exchange to film the drinks reception. Once we were happy with the outcome of the footage, it was time to edit! It was mutually agreed between Creative Individuals and Delta regarding the importance of editing and sharing highlights as quickly as possible, keeping social media up to date and drawing in constant attention. After a few hours sleep we were up and at it again!

October 2nd brought the official Delta Summit opening night, the build up to the main event was intense but we were all extremely excited to take on the next challenge! All videographers and photographers at the ready and the event began. A full house meant we had every opportunity to capture the event perfectly. Particularly capturing genuine reactions from the crowd, the influential speakers and the overall atmosphere of the conference. The Exhibition kicked off on 3rd October which was introduced by the one and only Steve Wozniak followed by keynotes from Abdalla Kablan, the Hon. Prime Minister Joseph Muscat and Hon. Silvio Schembri, it was our time to shine! Our creative individuals split up ready to cover the conference and capture all the different activities taking place throughout the day. From live streaming to filming, photos and editing we had covered it all. The atmosphere built throughout the day and we were able to capture incredible footage to showcase this conference. We decided to make short edits which could be shared throughout the day, keeping social media up to date. Once our day of filming was over we were able to head back to our hotel and edit the night away, creating amazing content to be shared with consumers all over the world.

The final day was held on 4th October. This day will go down in history as brand new, innovative digital technology was showcased, including Malta’s first holographic call presented by Vodafone. Some of the digital world’s most influential people attended the conference, speaking on panels and engaging with the audience. This was an incredible time for blockchain and digital enthusiasts in Malta. Once the conference had finished, the closing party began. The hard work and efforts put in to this by so many people could finally be celebrated as the conference had been such a huge success. Whilst our work isn’t over yet, we’re so grateful to have been a part of this event and being able to create amazing content with such a hardworking, dedicated team. Delta Summit, we were there and we were able to #StayCreative 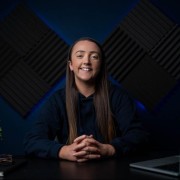 Megan Unsworth
Hi I'm Megan, Director and Head of Content Writing for Creative Individuals. The reason I do my job? I love to write even more than I love to talk, and that is a lot! I've been with Creative Individuals from the start and from not knowing much about digital marketing, I now know everything! Content Writing is my passion, especially when I can write about areas I'm knowledgable and interested in, that's why I write a hell of a lot of content for Creative Individuals. Please take the time to catch up with our latest news, read all about trending topics, find out what we discussed on our podcast and so much more right here on our Creative Individuals Blog. Also, if you're interested in hiring a content writer for your projects just drop me a message, I'm always happy to help and take on a challenge! Bye for now, Meg x

The Villa is an Unforgettable Experience